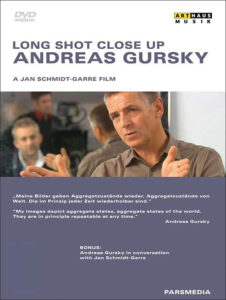 Review of the documentary Long Shot Close Up by Jan Schmidt-Garre about the artist Andreas Gursky. Published in Photonews 02/11 on the release of the film on DVD by Arthaus.

Bow of the giant
Andreas Gursky is known for the distance of his work from the world. You can call it critical or reserved, even aloof. His work ‘Hamm, Bergwerk Ost’ from 2008, on the other hand, sets a pleasant sign of closeness. Here it seems that it is not the supposed high-flyer Andreas Gursky, who with his ‘Ocean’ series 2009/10 sketches an “eschatological portent” (press text of gallery Sprüth Magers Berlin) of medium to deep blue icy cold, who is at work; but the Andreas Gursky who with ‘Cheops’ 2005 set a warm-toned photographic monument at eye level to an advanced civilization and the hard work associated with it.

His allegorical act of genuflecting to the dirty work culture of the European mines has been carefully recorded by director Jan Schmidt-Garre in his 60-minute film ‘Long Shot Close Up’. He embeds the documentation of the making of the large format ‘Hamm, Bergwerk Ost’ (Hamm, Mine East) within the framework of expert and often critical commentary by Hilla Becher, Werner Spies and Ukrainian art collector Victor Pinchuk. From Andreas Gursky’s first walk-through of the industrial motif, with arms folded behind his back, to the final shots taken with professional discipline, the handheld film camera is intensely present. In order to put the distance, he feels comfortable with, between himself and his subject, Andreas Gursky almost has to go down into the cellar at the Hamm-Ost mine. In the film, he is seen standing with his large-format camera in the coop (miners’ changing room) halfway down the stairs. Nevertheless, he does not succeed in creating the wide overview that has become typical for his pictures. The baskets of miners’ clothes on the ceiling of the mine’s coop seem to hang above the viewer only a few arm’s lengths away. Gursky leads the viewer’s gaze upward. The filthy work clothes, heavy boots, and well-worn bags seem to tell their everyday stories in many voices from there into the picture’s frame. How and why the three somewhat lost-looking worker figures were ‘knitted’ into the theatrical chain curtain at the bottom of the picture, and with what digital means Andreas Gursky reconstructs full employment in German coal mining through ‘literary’ condensation – Jan Schmidt-Garre’s film tells of this in detail and entertainingly.

Incidentally, the photograph described has been historic since last year: in September, coal mining finally ceased in the town in the northeastern Ruhr region. The artwork has sentimental value for the collector Victor Pinchuk because of this topic. The art promoter and entrepreneur from the still heavily industrialized Ukraine talks about this at the end of the film. He collects Gursky’s works on a grand scale and hangs them on the wall as visual theses at international business conferences. For him, some of them contain statements about the state and future of the global economy. This is one of the insights into the mechanisms of globalized markets that the film offers. The art market, however, is not directly addressed.
But the relationship between art and capital is intelligently thematized: Gursky’s images fascinate the powerful of this world, they like to invest in them their money often gained from black gold (and nothing else was coal in Europe once); closely connected to environments that have been or are to be transformed into post-industrial cultural landscapes, as in the case of the German Ruhr area. Thus, through looking closely at a single work, the film spins a delicate web of references that traces Gursky’s exact view of the world and what “holds it together at its innermost core” (Goethe, Faust I). Gursky himself seeks proximity to literature in conversation: “When you have seen a place, you can also describe it verbally. In literature this is actually always valid, but even though certain details have been exaggerated or added to, literature can be perceived as very true – even if it doesn’t correspond to the facts down to the last detail. In the case of photography, one immediately begins to complain: this is not so at all. In that respect, what I do is not pure photography.”
It is the perfection of memory that Gursky wants to achieve by his artistic means. In the case of ‘Hamm, Bergwerk Ost’, this reconstruction of the memory of a place is particularly easy to follow (and Marcel Proust would certainly have looked over his shoulder with interest).

Jan Schmidt-Garre also shows the “honor and glory of the world” (Faust I, same verse as above), which Andreas Gursky has often and extensively received for his art in the form of awards and institutional exhibitions in recent years, with the means of a distanced and yet sympathetically observing documentary film. The artist himself has his say in the main film and in a self-contained, 40-minute DVD extra interview with his own very pleasant deliberateness. Here, the filmmaker paves a path to a deeper understanding of one of the most complex and multi-layered creative works of contemporary photography with competent questions about his biography. In the interview, Andreas Gursky talks about his career, his convictions and attitudes. The different influences on his person and work during his studies in Essen and Düsseldorf are addressed and further contribute to the recognition of many aspects of inspiration. Also important work-strategic and technical questions are not left out. It is global insights that the film and the conversation offer. But the quality of this film on DVD, as in Gursky’s work, is also and especially in the details. It does justice to its subject, both formally and in terms of content, and is absolutely worth seeing.