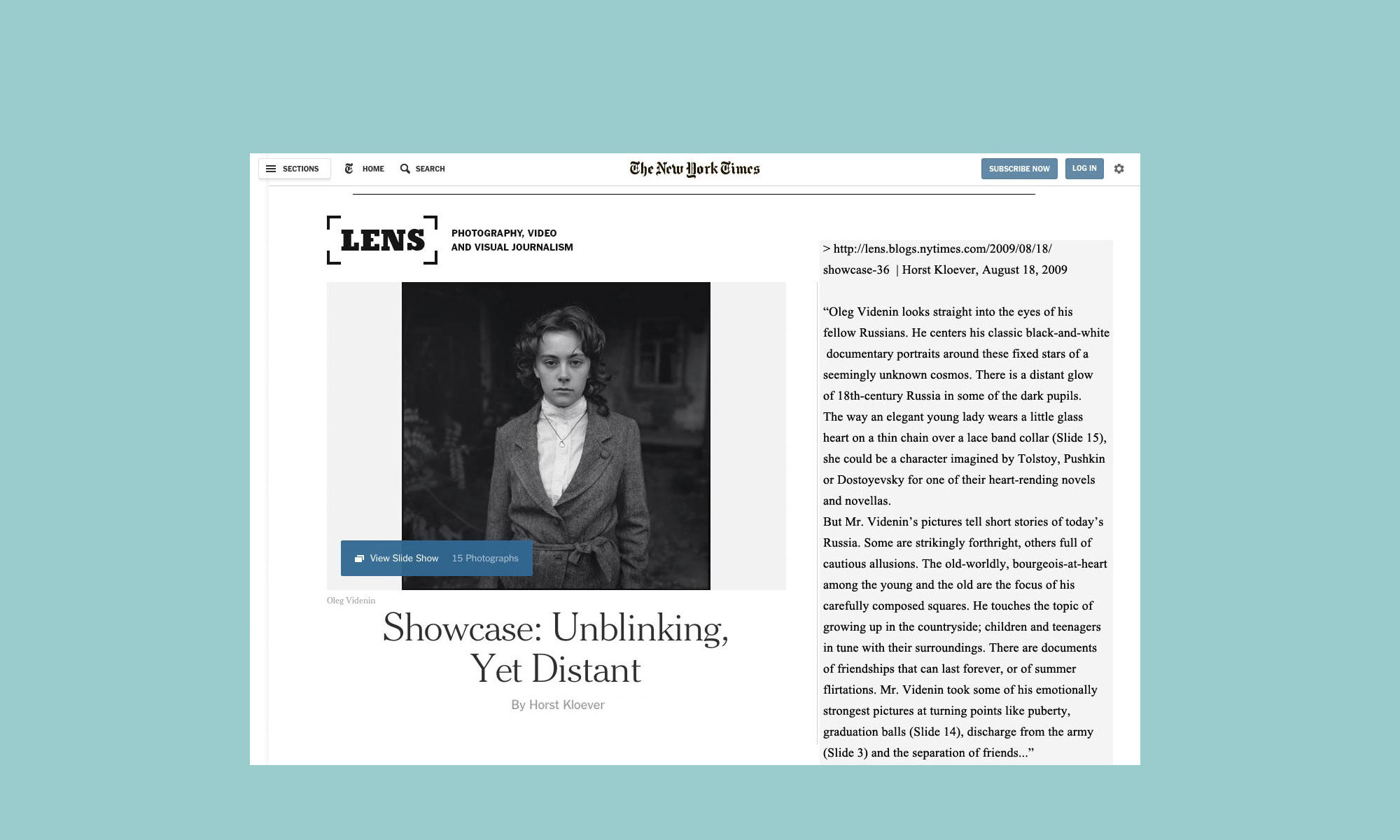 I have written several articles for the New York Times magazine LENS in English and published them since 2009. Two of them are online, here is a link to the article about Oleg Videnin with twenty reader comments. The article about Adam Panczuk’s photography you can find here.

Unblinking, yet distant – Oleg Videnin looks straight into the eyes of his fellow Russians.

He centers his classic black-and-white documentary portraits around these fixed stars of a seemingly unknown cosmos. There is a distant glow of 18th-century Russia in some of the dark pupils. The way an elegant young lady wears a little glass heart on a thin chain over a lace band collar (Slide 15), she could be a character imagined by Tolstoy, Pushkin or Dostoyevsky for one of their heart-rending novels and novellas.
But Mr. Videnin’s pictures tell short stories of today’s Russia. Some are strikingly forthright, others full of cautious allusions. The old-worldly, bourgeois-at-heart among the young and the old are the focus of his carefully composed squares. He touches the topic of growing up in the countryside; children and teenagers in tune with their surroundings. There are documents of friendships that can last forever, or of summer flirtations. Mr. Videnin took some of his emotionally strongest pictures at turning points like puberty, graduation balls (Slide 14), discharge from the army (Slide 3) and the separation of friends. Some of the old men in his pictures have seen so many changes around them that they seem to have given up caring. Many are highly decorated ex-servicemen of the Soviet army. Some kids that Mr. Videnin portrayed are obviously better off; others seem to be downright poor but they dress up for the caring photographer (Slide 6).
Russia is finding a little peace of mind following decades of social upheaval. There are radicals in society, and Mr. Videnin includes them in his photographic survey. But in general, his pictures speak of a relative calm and — in his subjects’ eyes — of a newly gained strength. Oleg Videnin was born in 1963. He graduated from the Bryansk Institute of Technology an an engineer of forestry, then worked as a journalist, a radio producer and a local television host. He became a successful television executive in the late 1980s. He started to take pictures in elementary school with a camera his parents gave him, developing and printing himself. But he never received formal training. In the days of perestroika, Mr. Videnin took commercial portraits of soldiers for a short time, then forgot about photography. It was an on-and-off affair over many years until 1998, when it turned into a passion. Today, he shoots primarily in his native town of Bryansk or the surrounding countryside, where he lives and works. He works with a Rolleiflex and makes 16-by-16-inch black-and-white prints in his home darkroom. Mr. Videnin is affiliated with Agency.Photographer.Ru, a partner of Magnum Photos. His hand-printed photographs will go on display Oct. 15 at the Sputnik Gallery, 547 West 27th Street, in New York. The title of the exhibition, and of his first book to be released at end of August in Russia, is “The Journey Home.”

Adam Panczuk and the Karczebs – Defying all odds, acting oddly.

Karczeby, a mixture of Polish and Belarussian, is a dialect still spoken in the east of Poland. Karczeb is a vernacular word for people strongly attached to the land they cultivate. A Karczeb is also called a stump with roots still stuck in the earth after the tree has been cut down — allegorical for the problems the various aggressive authorities have had with these people, trying to eradicate or dislocate them. They still stand tall on their land. And when a Karczeb farmer’s life comes to an end, he is buried in his soil, later on tilled by his children or grandchildren.
The Polish photographer Adam Panczuk, born in 1978, has memorialized these people in a series of black-and-white pictures in classic square format. It features Karczebs acting strangely at first glance: Ignacy, who breeds racehorses, has dug himself into the ground and holds up a small tree. (Slide 1.) Zofia is wearing a mesh of undergrowth, showing her connection to the land. (Slide 2.) Mirek hides his face behind the axe he used on a chicken only moments before his picture was taken. (Slide 3.) Zygmunt sports a fish necklace and water-plant wig standing in a pond. (Slide 4.) Ryszard hugs a heavy stone. (Slide 5.) Rafal, a graduate of the Faculty of Law at Warsaw University, plays a wild pig. (Slide 6.) Maria lives with her husband, three geese and five hens — simple as that. (Slide 7.)
The “Bearded Men,” dressed in sheepskin and woolen high hats, are eager to chase away the bad spirits of the past year in the first three days of January. (Slide 8.) This tradition has some similarities to the Lion Dance performed as one of the rituals of the Chinese New Year. The Bearded Men indulge in chasing the unmarried young women of the villages, threatening to keep them until next year. There is allegedly some matchmaking involved. Small children are mostly scared by the perfectly disguised men — acting as a deterrence in tune with some parents’ educational intentions. Mr. Panczuk still remembers fearful moments when the Bearded Men came down the street where he grew up, kicking up a fuss. Hubert hides in a big handmade storage basket. (Slide 9.) Marcin is the local lady killer. (Slide 10.) And Maria passed her land to her children. (Slide 11.)
Mr. Panczuk graduated from the Academy of Fine Arts in Poznan. He works for numerous magazines and papers in Poland, represented by the agency Vis à Vis. He won a Poland Grand Press Photo Award and a Sony World Photo Award in 2009 for his Karscebs pictures. In his large east Poland project, Mr. Panczuk is trying to document the changes in the villages he visits frequently. He already succeeded in changing the image of this remote area of Europe from backward to fantastically spirited and worthy of protection.

Horst Kloever is an author, curator and photographer, based in Berlin.